Why it pays to get a sweat on

By Laura Potter
Far from being something to feel embarrassed about, sweating is a mark of good health and fitness that we should be embracing

‘Everyone has around three million sweat glands, and the average person produces around a litre of perspiration per day – more in hot conditions or when exercising vigorously,’ confirms Dr Sarah Brewer, medical director for Healthspan. So, why do we sweat? ‘It’s essential to stop the body from overheating – it’s also why we sweat when we’re unwell and have a fever. It’s one of the body’s most important biological and physiological processes,’ says Dr Sohère Roked, a GP with a special interest in integrative medicine.

After all, glowing never saved anyone from potentially deadly heatstroke. ‘The action of sweat evaporating from the skin helps to cool us down so we don’t overheat,’ says Brewer. To put that risk into context, overheating is the reason we have a ‘death spike’ during heatwaves. Sweating is one of the things that keeps us safe, alongside hydration and seeking shade. ‘If we overheat, that affects the way our organs function – it’s why heatstroke can be fatal; because the body can’t cool down quickly enough,’ says Roked.

Despite it being such a natural – and crucial – function, sweating is shrouded in negative connotations. But it’s something we should be proud of, especially after a workout. ‘Sweating during and after exercise shows you’ve generated heat and burned a good number of calories,’ says Brewer.

In fact, the more you sweat, the fitter you may be. ‘Fit people can work harder, generate more power, and sustain power for longer than those who are unfit so will generate more sweat and sweat more profusely. As a result, studies show that fitter people, on average, sweat more than unfit people,’ says Brewer.

Another reason why we sweat is to detox. ‘Sweating is one of our primary methods of detoxifying from things like environmental toxins and pollution. It also helps us to reduce the build-up of toxins in our systems,’ says Roked. ‘It stimulates the lymph glands, to help them flush out things that don’t need to be there, and that in turn reduces inflammation, so it’s really healthy.’ But what is actually in sweat? ‘It contains water, minerals like sodium, potassium, calcium and magnesium, and some trace metals including toxins such as lead’. Research has also found that sweat contains a natural antibiotic called dermcidin, which acts as a first line of defence against microbial pathogens, killing invaders on contact. Your sweat is a bit like a salty suit of armour, then.

Get to know your glands

One of the main reasons we see sweat as negative is its odour – so why does your armpit sweat smell unpleasant, while the sweat from your hands or face is simply salty? ‘We have two main types of sweat gland,’ says Brewer. ‘Eccrine glands are found on all skin (except the eyelids), but more concentrated on the palms and soles. They secrete water and salts directly onto the skin surface. Apocrine glands, which only become active at puberty, are found on hair-bearing skin, so mainly the armpits, groin, nipples and scalp, and produce modified sweat (containing proteins, fats and sugars) into hair follicles rather than onto the skin surface. Initially odourless, once broken down by skin bacteria, an unpleasant smell develops.’ So it’s not sweat itself that smells, but the act of armpit bacteria digesting fats and proteins in our sweat.

Of course, it’s easy to feel positive about sweat we’ve produced through our athletic endeavours, but plenty of other things can kick-start our body’s sprinkler system, including emotional highs and lows – so what’s the cause? The flight-or-fight response, says Brewer. ‘The sweat generated is the same, but the cause is different. Emotional sweating causes over-activity in the sympathetic nervous system.’ Roked elaborates: ‘The increase of stress hormones like cortisol affect our sympathetic and parasympathetic nervous systems when we’re nervous or embarrassed. Because the body can’t distinguish between physical or emotional stress, it reads them the same and reacts by sweating, and that’s normal.’

Then there’s hormonal sweating, something that disproportionately impacts women. ‘When hormones drop before a woman’s period, it can cause sweating,’ says Roked. ‘Similarly, when you have higher levels of oestradiol, normally mid-cycle when you ovulate, that can cause you to feel hot and sweat – so both higher and lower levels of oestrogen can cause sweating.’ Research shows during days 19-22 of a woman’s menstrual cycle, known as the luteal phase, we have a raised body temperature and higher sweating rates, compared to follicular phase (from day one, for 10-22 days).

The menopause is another time where hormones go awry and lead to hot flushes and night sweats. ‘Falling oestrogen levels stimulate a part of the brain called the hypothalamus, which starts to work overtime to produce hormones in an attempt to kick-start the ovaries,’ says Brewer. ‘The hypothalamus is involved in regulating other automatic functions such as temperature regulation, sweating, flushing and the stress response. So, when it’s overworked, these other systems can go awry to trigger flushes and night sweats.’

How much you sweat can also be influenced by your genes, ethnicity and even the weather where you grew up – that’s how individual it is. ‘If you were brought up in a very hot climate, your body responds by developing more sweat glands so you don’t overheat. And once you have them, you have them, so if you move to a cold country you won’t have less,’ explains Roked. ‘We’re all unique, and the amount we sweat isn’t always due to fitness or body size.’

Of course, if you sweat so much it causes embarrassment and is life-limiting – for example, you’re changing clothes several times a day, even when you’re not physically active – then you may have hyperhidrosis disorder, which you should see your doctor about, as there is plenty that can be done from using special deodorants to referrals for Botox. But sweat isn’t shameful, it’s as normal as sneezing or hiccups.

A final thought is that researchers have discovered that the eccrine sweat glands also help to heal wounds – providing cells for recovering from scrapes, burns and ulcers. So next time you call yourself as a ‘sweaty mess’, reframe it – you’re actually a sweaty warrior. 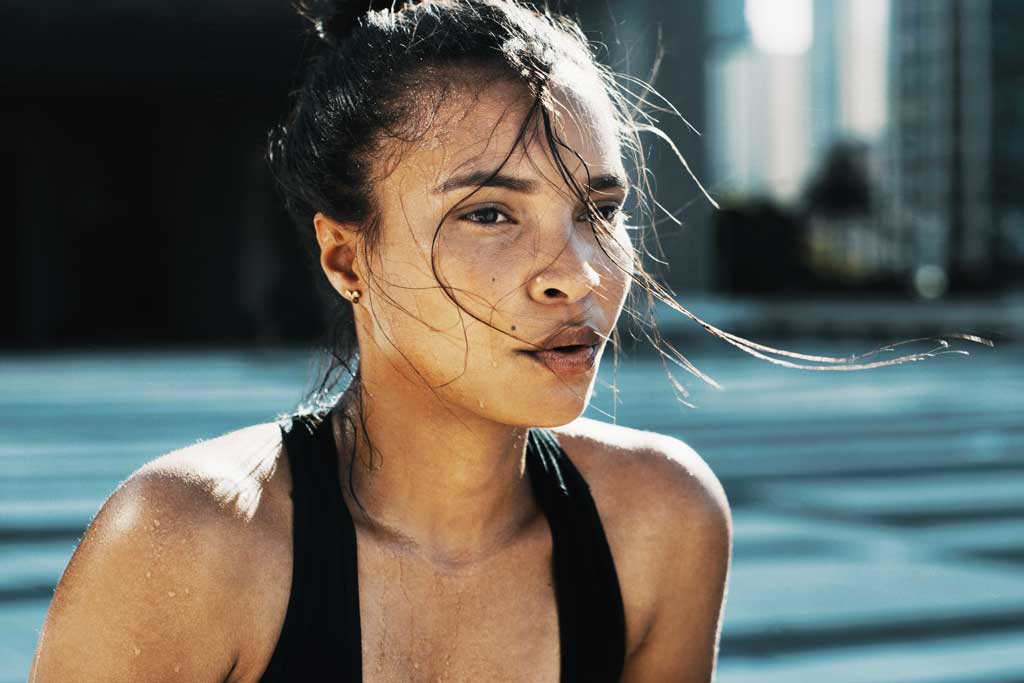 Article Name
Why it pays to get a sweat on
Description
Far from being something to feel embarrassed about, sweating is a mark of health and fitness that we should be embracing. So, why do we sweat?
Author
Laura Potter
Publisher Name
Healthy magazine
Publisher Logo