Is virtual fitness here to stay?

By Laura Potter
Virtual fitness platforms promise the benefits of group exercise in the comfort of your own home. But do they live up to the hype?

It’s a clear, sunny day, but rather than hitting the park for a run, I’m pounding a treadmill in an office with a fan blowing hot air at me. I’m testing Zwift’s virtual fitness platform, taking on a 5K run around a fantasy island called Watopia. It starts in a cityscape, which I convince myself is Tokyo or Singapore, before taking me alongside a beach, over the sea on a wooden footbridge, then through lush tropical landscapes back to the finish.

The scene transports me back to a beachside run I did on holiday in California. ‘There’s a phenomenon called biophilia,’ explains sports psychologist Simon Marshall. ‘Mood, satisfaction and perceived exertion are all better when you’re in an aesthetically pleasing environment, and you can get this biophilic response in a virtual environment, too.’

Various aspects, though, jerk me back to reality. I’m annoyed that my avatar looks like she’s barely breaking a sweat (they tell me they’re working on this), and by the occasional cues on screen suggesting I turn left or right. ‘On a virtual run, your frontal cortex has to do extra work,’ says Marshall. ‘The beach evokes memories, so it promotes associations and emotional reactions, but because you’re having to constantly imagine and recreate, anything that brings you out of that is like being woken up.’

Despite these niggles, it’s fun, and could be a valuable training tool – virtual fitness does away with excuses like bad weather, and makes following a training plan or doing interval training much easier. More than a million people in the UK have a Zwift account, although it’s mostly men – there’s an 80/20 male-to-female split for running, 85/15 for cycling.

Why is this? ‘There are three main drivers of motivation – comparison, social reward and emotional support,’ says Marshall. ‘With Zwift you’re getting immediate feedback on how you’re doing compared to others, and social reward in the form of a leaderboard, but there’s almost no emotional support and women place far more value on that than men.’

Marshall suspects the gender split may be far slimmer on Peloton. It beams spinning classes into people’s homes on specialist bikes, and let’s not forget, participation in group exercise in the UK is 71% female. ‘Peloton know the importance of the dynamism of the exercise leader, so they curate the world’s best instructors, and pay them huge amounts to broadcast their classes.’

I’ve never got into spin. I’m not a fan of the darkened room and banging tunes vibe, and I always question whether I’m doing it right – when I’m told to ‘crank up the resistance’, how much? And when my stats are up on a big screen, I fear I’m in for a bit of good old-fashioned public shaming.

Peloton feels different. My cadence, resistance and output are right in front of me – and only me. And rather than being told to ‘crank up the resistance’, I’m told to put my resistance to ‘between 40 and 55’. When I hit it, the numbers turn yellow; otherwise they’re red, with an arrow. I find myself pushing towards the upper numbers, sprinting hard and enjoying it. It’s costly – from £1,750 for the bike, plus £45 per month for the subscription, but I can see why people invest.

Marshall raises another important lure of virtual fitness: ‘One of the biggest barriers in sport participation for women is feeling they’re “not the sporty type”. It’s caused by identity foreclosure. If you always got picked last in PE, had childhood asthma, or lacked hand-eye-coordination, you decide you’re “not the sporty type”, then spend your entire adult life believing it.’ It rings true. I feel out of place in a spin class and assume everyone else is better than me. But put me on a spin bike alone and suddenly I’m confident, engaged and motivated.

Then there are virtual races. The last event I took part in was a four-person team 5K relay at the Olympic stadium in London. The atmosphere was electric, I managed a PB and the buzz lasted well into the next day. How could a virtual exercise compete with that? I sign up for the Go Girl Virtual 5k at Virtual Runner UK, who have more than 50,000 active subscribers, 69% of whom are female. The deal is I run whenever I want, then submit my ‘evidence’ (a Strava screengrab) and my time is posted on the online leaderboard. Then I’ll receive a medal in the post. All for £6.

I tackle my usual 5K route but while it’s the same old run, I feel more motivated because it’s now a race. I’m able to ignore my heavy legs and end up equalling my PB at 24.33. I’m delighted – and a bit shocked. ‘The human brain is wired to be competitive, so it’s all a question of awakening the competitiveness,’ says Marshall.

Virtual races may lack the atmosphere of real events, but avoid the downsides too – like bad weather. But the attraction goes deeper. ‘In a virtual race you get all the positives of being competitive, but without the potential for judgement and ridicule,’ says Marshall.

For some, virtual fitness platforms may be a first step into real world sport, but it’s individual. ‘Neither real world nor virtual exercise is objectively better,’ says Marshall. ‘My advice would be do what feels good for you. For some, that’s being in their basement alone, for others it’s being outdoors.’ For me, after this experience, it’s likely to be a bit of both. 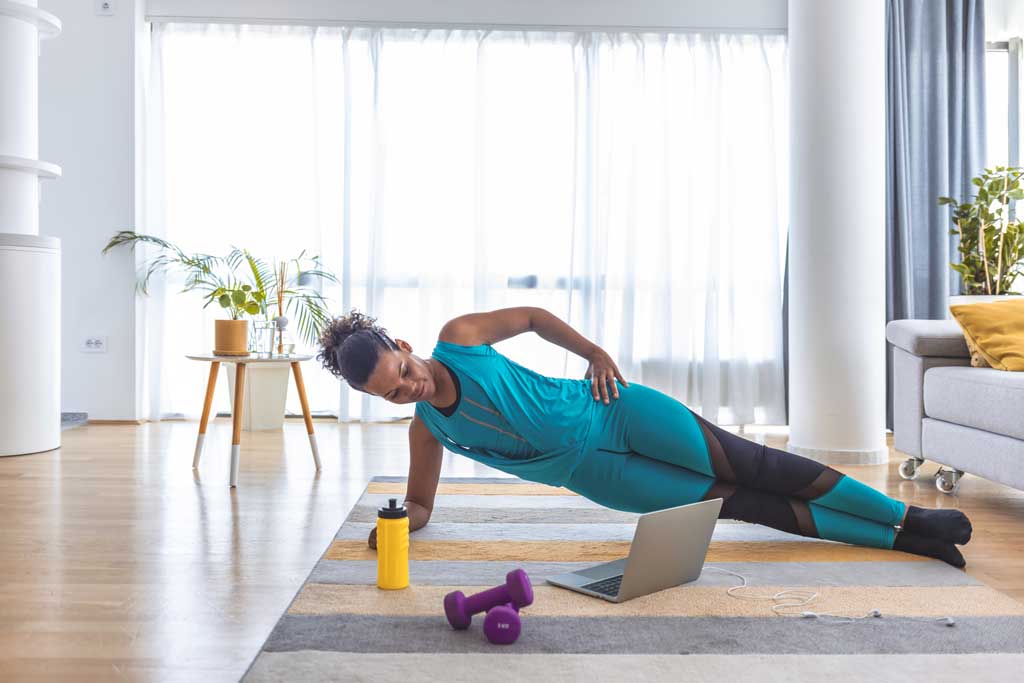 Article Name
Is virtual fitness here to stay?
Description
Virtual fitness platforms promise the benefits of group exercise in the comfort of your own home. But do they live up to the hype?
Author
Laura Potter
Publisher Name
Healthy magazine
Publisher Logo