Real life: “Track cycling frees me from my anxiety”

By Healthy Magazine
When stressful thoughts began to dominate Amy Sedghi’s life, she found therapy in whizzing round a velodrome

I was 22 when I first began to understand what was happening to me. Hunched over a sandwich, reading an article by Guardian journalist Mark Rice-Oxley, I felt like he’d crawled inside my mind and was describing what he’d seen. At first glance, we didn’t have much in common. He, a male, highly established newspaper editor in his 40s with reporting stints in Russia under his belt; myself, a young female university student embarking keenly on her first piece of serious work experience. But yet, here we were, struggling with the same thing: depression.

I’d already been suffering with it for years, but had never really identified with it. To be frank, my main concern was hiding it. I certainly wasn’t ready to talk to anyone, apart from my doctor, about it, but reading Mark’s words really struck a chord. I began to understand it as an illness, and more importantly, it made me feel less alone. Over the years, depression is something that has been a constant, although sometimes it’s more a shadow than an all-encompassing darkness. My experience of anxiety, though, has been a more recent affair.

At around 27, I started becoming anxious about things that previously wouldn’t have fazed me. Driving my car down the road, popping out to the supermarket, going to meet friends – they’d all become anxiety-inducing events, complete with sweaty palms and a mind spinning with negative thoughts and possibilities. I’d always been quite carefree and adventurous, especially when I was younger. I thought nothing of spontaneous trips, and had travelled to far-flung places, doing all the cliché hair-raising activities such as bungee jumping and skydiving. Yet here I was getting hot and teary at the idea of nipping out to buy some milk.

I still recall a conversation with a friend who works in mental health, who told me that for those suffering with panic attacks, sometimes the worst thing you can do is avoid the things that scare you. Essentially, if you eliminate all the situations that fill you with fear, you limit yourself until the world you that you feel safe in gets gradually smaller. That idea really left an impression. I was determined, however anxious I felt, that I didn’t narrow my horizons. I never wanted to miss out on the things I loved because fear held me back. So, over time, I’ve made it my mission to embrace the things that scare me, and to prove I can do them without the world falling apart.

I’d been enthralled by the cycling success of Team GB at the Rio 2016 Olympics and I watched in awe as Laura Kenny, Elinor Barker, Katie Archibald and Joanna Rowsell Shand stormed through their events. Their victorious, beaming faces gave me the passion to give it a go. They seemed so brave, powerful and determined. So, not long after, while back in Dorset visiting family, I ended up at a small introductory track session with the Poole Wheelers at Bournemouth Velodrome.

I rocked up in shorts and a T-shirt, completely naive with not a shred of Lycra on me, and ended up in the centre of the track with a group of children all eagerly awaiting their turn. My excitement soon led to nervousness and it was the perceptiveness of a young Lucy Gadd, now a professional cyclist, who gently encouraged me to stay and give it a go.

I loved it straight away. It felt like freedom and my mind felt alive, but for once not with negative thoughts. It felt like I was flying as I whizzed round that velodrome. I was hooked. When I returned to London I was delighted to discover one of the world’s oldest outdoor velodromes nearby in Herne Hill, and quickly signed up for an induction.

For me, cycling at the velodrome brings me relief. It’s a time when my constantly active mind, with its worries and imagined disasters, can have something else to focus on. Being attached to a fixed-wheel bike with no brakes, and riding inches away from others, your mind has to focus. It feels like a meditation and, for me, it truly acts as a therapy. It might not seem the obvious choice for soothing the mind and body, but it’s something I’ve found to ease my anxiety over the last few years.

Prior to the track, my boyfriend had bought me a bike. A passionate cyclist, he wanted to share what he loved. In theory, I was excited to use it; in practice I was paralysed by fear. Over the years, I’ve become an experienced road cyclist too, but the velodrome, with its lack of cars or pedestrians dashing to cross your path, is a pure cycling heaven. People often ask if track cycling is scary, but once you’ve done your training and gained some confidence, it’s the opposite. I feel protected and safe. If anything were to happen, I’m surrounded by caring and experienced riders and staff.

I also love watching the seasons change. In the summer, there’s no better place to be than at the velodrome, a hidden cycling lover’s paradise a short walk off a quiet, leafy residential street in southeast London. From the glorious sunsets to the copper leaves drifting down, it’s a much-needed dose of nature and a great opportunity to be outside, breathing in the fresh air.

Over the last couple of years I’ve been encouraged by other riders and coaches to take part in racing too. From beginners to competitive riders, there is a suitable level for everyone, and I’ve found myself huddled with other newbies, swapping questions, advice and encouragement before a competition. Afterwards, we celebrate over a cold beer from the bar, the sense of achievement being the best reward for our efforts.

Of course, there are times when my anxiety is still overwhelming, but those hours I’ve spent at the velodrome remind me that I am capable. The feeling that fear doesn’t control what you can do is truly liberating. 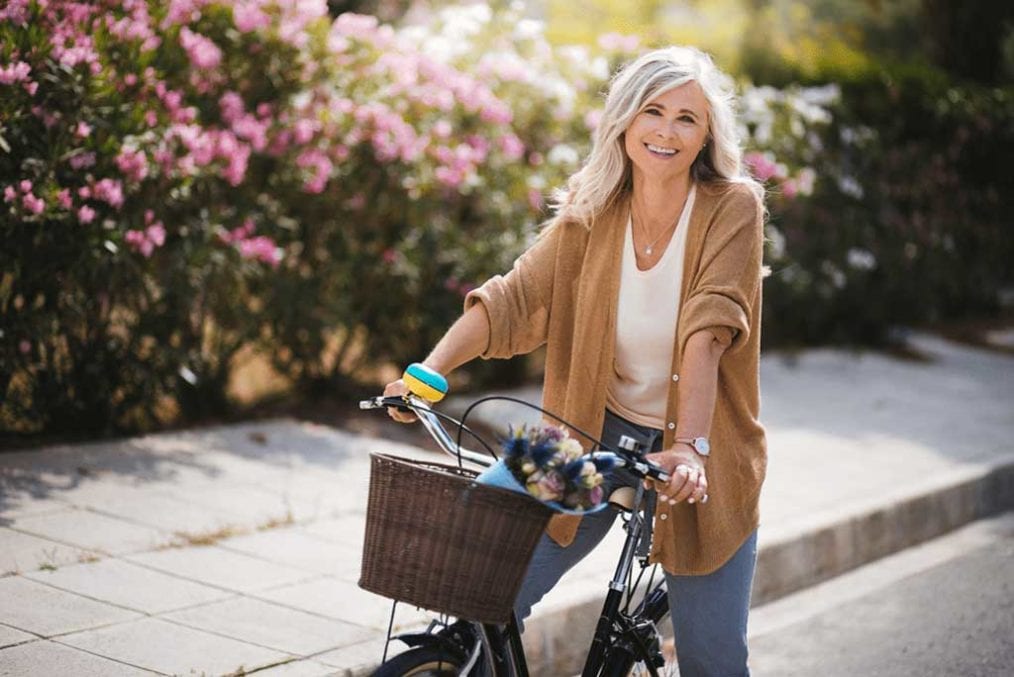 Fitness How to get started with cycling It’s a great way of toning up and keeping fit, while taking in some scenic views – here’s how to get pedalling