As the festive period is fast-approaching, we’re sharing this delicious Christmas pudding recipe for you to try. It uses Doves Farm Organic Wholemeal Spelt Flour, which means it has a higher fibre content than traditional figgy pudding, as well as providing calcium and vitamin E. Simply reheat the pudding on Christmas Day to serve and flame with a few extra tablespoons of rum or brandy, if you fancy. For teetotallers, this recipe also tastes great with fruit juice in place of alcohol, but it won’t keep as long if it’s booze-free, so you’re better off waiting until December to make it!

1 Rub some butter around the inside of a 1.2L/2 pint pudding basin. Cut two circles of parchment or greaseproof paper to fit inside the top diameter of the basin.

2 Measure the flour, sugar, mixed spice and cinnamon into a bowl, stir to combine. Put the raisins, sultanas, currants, chopped prunes, mixed peel, blanched almonds into a separate large mixing bowl. Grate the lemon rind into the bowl, squeeze and add the lemon juice and mix together. Sieve the flour mixture onto the fruit and stir until the fruit is well covered. Gently melt the butter and stir this into the fruit.

3 Break the eggs into another bowl or jug, add the brandy, rum or fruit juice and whisk together with a fork. Pour this into the mixing bowl, and stir everything together really well. Leave the mixture to stand for at least 2 hours or overnight.

4 Stir the mixture, tip it into the prepared pudding basin and smooth the top. Press the circles of parchment or greaseproof paper onto the top of the pudding.

6 Once cooked, allow the pudding to cool without removing the tin foil and parchment. Store the pudding in a cool dark place for up to two months and re-heat to serve. 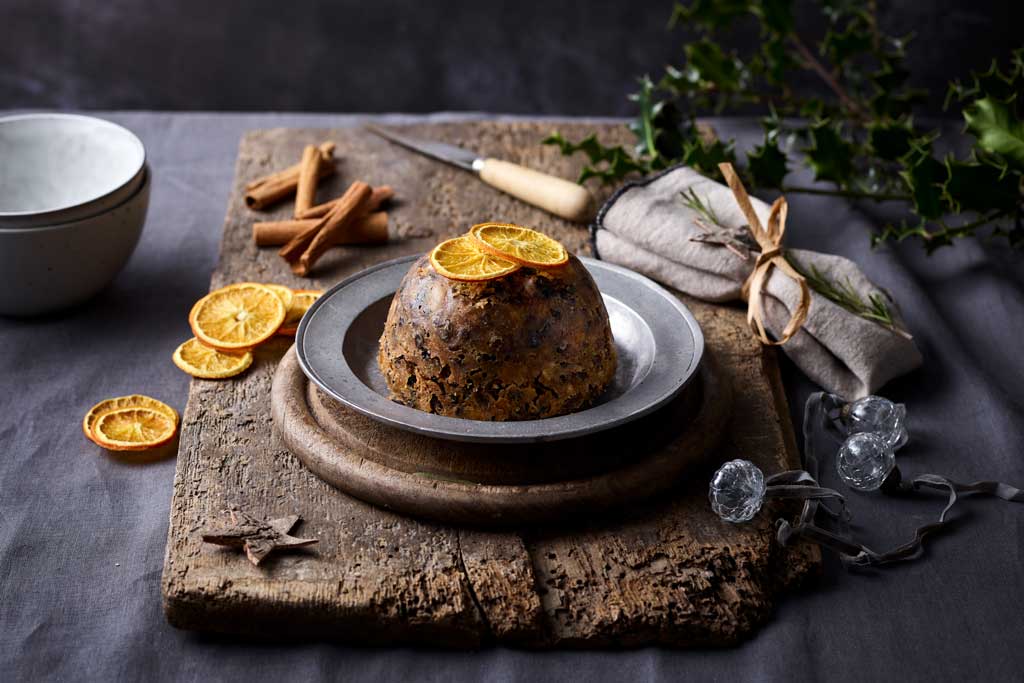