Should I try seed cycling?

By Niamh Leonard-Bedwell
Could adding spoonfuls of seeds to your daily diet combat PMS, regulate your periods and even boost fertility?

A source of heart-healthy fats, fibre and important vitamins and minerals, seeds are a nutritionally dense ingredient, perfect or adding to a smoothie, or sprinkling over your lunchtime salad. But, according to a naturopathic practice called seed cycling, they might have an influence over your hormones, too.

Seed cycling is based on the idea that certain seeds should be eaten at specific times of the month to help regulate your hormones through the menstrual cycle. In her book Beyond The Pill, naturopathic doctor Jolene Brighten claims that seed cycling can restore hormonal balance after coming off birth control, reduce period pain, combat mood swings and even improve fertility.

But if you’re hoping that yesterday’s chia seed pudding will be enough to work hormonal wonders, think again. Seed cycling prescribes specific daily dosing over the course of a typical 28-day menstrual cycle.

The practice follows the belief that your menstrual cycle can be spilt into two phases: the ‘follicular phase’ and the ‘luteal phase’. The follicular phase starts on the day you get your period (day one) and ends on day 14, when an egg is typically released, if you have a regular 28-day cycle.

During the follicular phase, you’re advised to eat one or two tablespoons of flaxseeds and pumpkin seeds to boost oestrogen production. Proponents claim this works because both seeds contain a fibre called lignan, which has a weak oestrogenic effect as the body metabolises it.

The luteal phase occurs after ovulation, usually on days 15-28, when the ovaries produce progesterone, which helps thicken the womb lining in preparation for pregnancy. A healthy balance of progesterone should also help to ease PMS symptoms, including mood swings, bloating and insomnia. When following the rules of seed cycling, this is when you’d swap your flaxseeds and pumpkin seeds for equal quantities of sesame and sunflower seeds. This is because sesame and sunflower seeds contain lignan-related compounds which may help boost the production of progesterone (though this idea isn’t yet backed up by science).

If you don’t have a 28-day cycle (don’t worry, a lot of us don’t), you can adapt the plan to fit the length of yours, starting on the day of your period, and ending the day before your next one starts. And if you’re not having periods, you can follow the 28-day cycle of the moon, starting the follicular phase on a new moon and beginning the luteal phase on a full moon. This is based on the idea that women’s menstrual cycles were strongly linked with the lunar cycle, prior to the introduction of electric light. Still with us?

In addition to boosting fertility and combating PMS symptoms, seed cycling is claimed to have benefits for postpartum and menopausal women, as well as women who suffer with conditions that are caused by, or result in, hormonal imbalance. After childbirth, some think seed cycling can help restore a regular menstrual cycle. It’s also thought to minimise uncomfortable symptoms such as hot flushes for women going through the menopause. Furthermore, some say it eases the painful symptoms of polycystic ovary syndrome (PCOS) and endometriosis.

While there’s no conclusive scientific evidence that seed cycling lives up to these health claims, studies into the hormonal effects of the individually prescribed seeds have shown promising results. However, most of the studies have been relatively small, and tested the effects of large quantities of each seed, so it’s difficult to know whether the effect would be the same with the 1-2 tbsp that’s prescribed in seed cycling.

In a 2014 clinical trial, 181 women who had cyclical mastalgia (breast pain related to the menstrual cycle) were randomly assigned a daily dose of flaxseed bread (equivalent to 30g of flaxseeds), wheat bread or an omega-3 supplement. The dietary change was implemented over the course of two menstrual cycles and the women were asked to rate the intensity of their pain. Overall, women given the flaxseed bread experienced the greatest reduction in mastalgia.

Research into the effects of sesame seeds on postmenopausal women has had some positive results. In 2006, a small, randomised, placebo-controlled study showed adding sesame powder to a diet helped improve cholesterol levels and antioxidant status (which can be associated with an increased risk of developing heart disease and some cancers) for healthy postmenopausal participants. Additionally, the sesame supplement appeared to increase the level of certain sex hormones, but this was only studied in eight participants, so more research is required.

One case study explored the benefits of using flaxseed to ease symptoms of PCOS. Typically, women with this condition display high levels of hormones called androgens. A 31-year-old woman with PCOS took 30g of flaxseed daily for four months. Afterwards, her androgen levels had significantly decreased. Further research is clearly needed, but could lead to the development of affordable natural treatments. 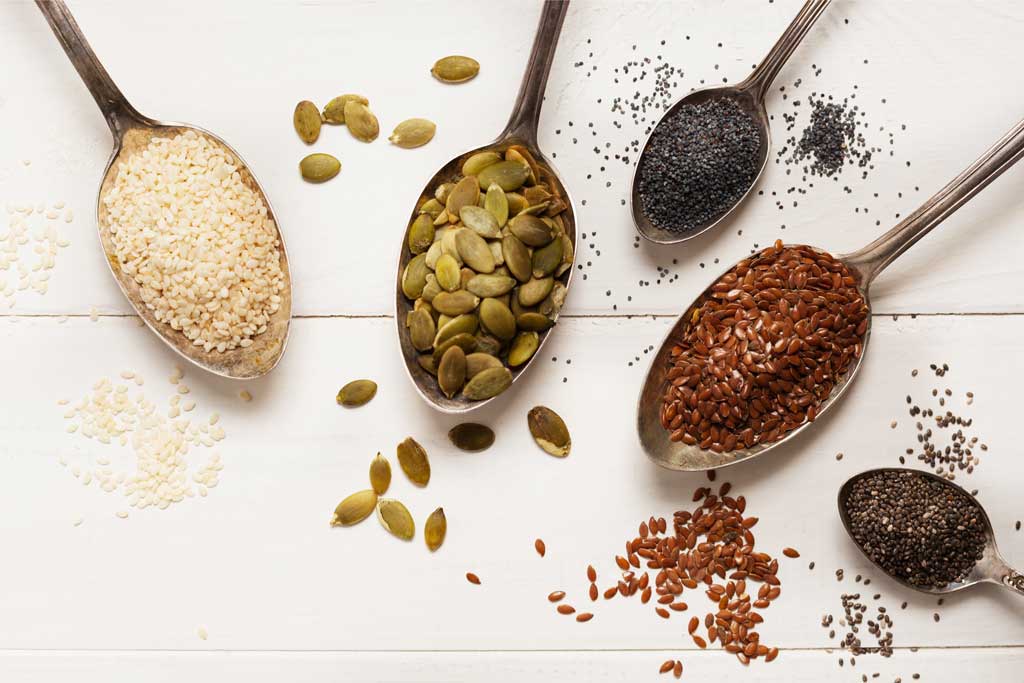